Tygra is a male Thunderian, architect, scientist, and noble member of the ThunderCats. He can become invisible, however, this doesn't prevent him from being seen by strong enough detectors. Along with the ability to turn invisible, he is armed with a large bolo whip. He is also the ThunderCats' Council leader, even though Lion-O is in command.

A staunch, level-headed warrior based on the tiger, Tygra is the one Lion-O often turns to as second-in-command and for counsel. He is responsible for the design of all of the ThunderCat structures on Third Earth — theCat's Lair and the Tower of Omens — as well as the devices the ThunderCats used when exploring New Thundera. He is also gifted with "mind-power" — the ability to create lifelike illusions in other people's minds; he used this for Lion-O's Anointment Trial, but it puts a great strain on him. He uses a whip-like bolas in combat, with which he can render himself invisible to the naked eye. In the episode "All That Glitters," Lion-O instructs Tygra, "If I do not return, you will be the new Lord of the ThunderCats." This verifies that indeed, Tygra is the second-in-command.

According to Lion-O, Tygra is both neat ("The Garden of Delights") and a very skilled pilot and shooter with great aim ("ThunderCats - HO!, Part 5").

Tygra, like the rest of the Thundercat Nobles, fled his dying home planet aboard their ship. Tygra suggested that they awaken Lion-O, agreeing with Jaga that he must take the good with the bad and see the destruction of his home. Tygra was given new clothing and weapons by Jaga along with the others, using a bolo whip now in battle alongside his mind powers. When the Mutants boarded their ship, Tygra set off with Cheetara to fight them back.

Tygra sadly bid farewell to Jaga as the ThunderCats entered their suspension capsules, and was later awakened by Lion-O, where he once again fought back the Mutants, telling Lion-O he had become a 'fine figure of a ThunderCat'.

Once, while looking for Thundrillium, Tygra found a large amount of Thundrillium in a cave. Investigating, Tygra was unaware that the mysterious cave actually sped up time, and he was aged almost until death. Weak and frail, the other ThunderCats managed to keep him in a stable condition until they were brought to the mystical fountain of youth by their new allies, the warrior maidens. Just as Tygra was on the verge of death, the fountain restored his youth.

When a large worm began to cause Earthquakes across Third Earth, Tygra tracked it down and pursued it down a hole in the ground. There he met Silky, a strange female plant-like being who was really Mumm-Ra in disguise. After being given a piece of fruit by Silky, Tygra was put under a spell by Mumm-Ra, who commanded him to steal the Sword of Omens. Although Tygra was able to steal the sword and bring it to Mumm-Ra, he was soon freed from Mumm-Ra's influence and quickly got back into battle, making the Mutants and Mumm-Ra pay for their trickery.

Tygra was once again tricked by Mumm-Ra, along with Lion-O, which caused them to fight one another. Displaying his battle skills against the Lord of the ThunderCats, Tygra's whip shattered the Sword of Omens. After the fight, he and Lion-O soon realized they had both been deceived.

When the time came for Lion-O's Anointment Trials, it was Tygra's task to test him with his mind powers. Though Tygra rarely used his mind powers because they were so taxing, he had actually been saving his mental strength in preparation for the trial. Tygra tried to trick Lion-O with several illusions, but Lion-O managed to overcome them all. Tygra warned Lion-O that he would face his greatest fear by the end of the trial. Tygra also had to use his powers to trick the Mutants and keep them from interferring with the trial. Finally, Tygra created an amazing illusion of Thundera, the ThunderCats' dying home planet, this was Lion-O's greatest fear. Lion-O was able to overcome his fear, and fought Tygra in hand-to-hand combat, besting the exhausted Tygra. Tygra did not again use his mind power, due to the huge strain it put upon him.

When the time came for some of the ThunderCats to return to New Thundera, Tygra and Pumyra stayed behind to look after Third Earth.

Tygra wears a bodysuit made up of different shades of blue that covers almost his entire body. It is asymmetrical, with one shoulder having a pauldron of sorts with gold piping at the end. He has the striped appearance of a tiger, with upswept hair forming "wings" at the end. His boots are unusual, as the toes and heels are cut out, leaving the claws exposed. In the new 2011 series, all of the cats wear footwear like this, but in the original series, only Tygra, Bengali, and WilyKit wear them.

Tygra is able to turn himself invisible to the naked eye. He also possesses mind power, which enables him to creates illusions that can deceive his opponents; using this power however drains him.

Tygra is also an intellectual, being the architect of the group, and has been seen conducting scientific research (he even works in a laboratory sometimes). He's grounded and calm, usually considering every aspect of a situation rather than rushing into conclusions or actions.

He also has some notable weakness: he cannot swim unless he is invisible, and twice he has shown himself vulnerable to addiction. By his own admission, he has self confidence issues, and has been shy since he was a child.

In the comics, after Lion-O left to complete his training in the Book of Omens. At the same time Cheetara is enslaved by the Mutants for five years and during that time she's subject to constant humiliation.

On the other hand, Tygra was captured and tortured to the point of become a somber individual. During his five years in captivity he was required to design structures for Mumm-Ra and the Mutants. Tygra was rescued and helped overthrow the evil sorcerer.

Finally, it was Tygra who helped Cheetara heal her emotional wounds. Cheetara relies on him to recover from the terrible times she went through. And it's with Tygra she begins a stable relationship. Fifteen years later Tygra and Cheetara become a couple, the King's Elite Guards, and are the parents of the New Thunderkittens. 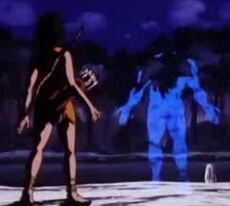 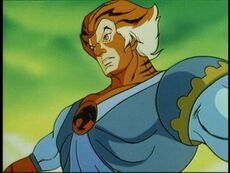 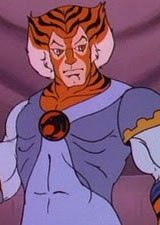 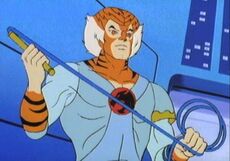 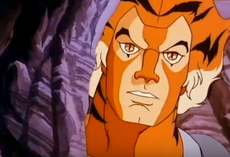 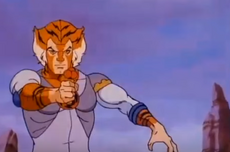 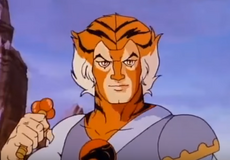 Add a photo to this gallery
Retrieved from "https://thundercats.fandom.com/wiki/Tygra?oldid=43592"
Community content is available under CC-BY-SA unless otherwise noted.