The youngest member of Mon-Star's mob he first appeared in the Silverhawks episode "Stop Timestopper" Timestopper approached Molecular and Mumbo Jumbo as they are about to make a heist, and Timestopper used his limbo clock to steal the limo right under their noses, Mon-Star was so impressed by this that he allowed Timestopper to join the mob.

Timestopper has the limbo clock on his chest when he presses the button the clock begins to countdown to zero than freezes time, for 1 limbo minute after that Timestopper must start time again or his clock explodes. Timestopper can choose who to freeze & who can move freely when he stops time. Timestopper has a jet pack on his back that he can fly through space.

Timestopper is afraid of the dark, and his limbo clock cannot freeze time in total darkness. 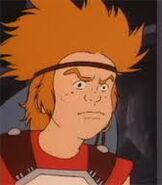