Thundera is the homeworld of the Thunderians. Before its destruction there was such great peace - particularly among the Cats - that the natives did not even need to worry about covering themselves in protection from attack or the elements.

Thundera was destroyed at the beginning of the series. Mumm-Ra later teleported to where Thundera once was and reformed it back together. Now it is inhabited by the ThunderCats and other surviving Thunderians. In the episode "All that Glitters," Panthro mentions that gold originally did not exist on Thundera. This may indicate that the Thundera crust is generally poor of heavy elements. However, as the ThunderCats were able to create a high-tech civilization, obviously, they are familiar with silver or platinum (without which it is almost impossible to imagine the development of advanced chemistry).

In spite of the peace enjoyed by the natives, Thundera also had dangerous species, such as giant spiders that would attack anyone. It had 12 great seas upon its surface, and in the sky there hung apparently more than one moon based on the phrase "moons of Thundera". The ancient Thundereans did not originally come from Thundera; there was a great migration that lead to the planet's settlement ages ago.

Thundera's destruction was the result of the Sword of Plun-Darr. It was cast into the deepest canyon on the planet's surface by Jaga and fell into the molten core of Thundera. Its attempts to escape by Mumm-Ra caused the mass eruptions which obliterated Thundera, but the sword itself survived.

How Thundera was settled or whether it was named for any particular individual was never established or revealed on the show. However, given the prevalence of the use of magic in many such activities as those of Jaga, of the Jaguar Race of Thundereans, it may be speculated that there was once a mortal humanoid sorcerer, who eventually became a god, named Thundera. It might then have been he who inspired the Thundereans's migration to the world to which he probably gave his name. 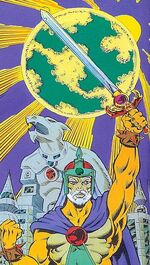 Retrieved from "https://thundercats.fandom.com/wiki/Thundera?oldid=43620"
Community content is available under CC-BY-SA unless otherwise noted.