ThunderCats: The Lost Eye of Thundera is a video game by Elite Systems Ltd and was released on a number of platforms.

No. of Players: 1 player

When the game begins, the player is shown an image of Mumm-Ra, the Thundercats' main villain, and is told that Mumm-Ra now has the Eye of Thundera, the source of the Thundercats' power. The player takes control of the character Lion-O and maneuvers him through 14 side scrolling levels to search for the missing Eye of Thundera. The path through the game can be varied on later levels, so it can be played through more than once and new sections can be found, even though the individual levels only scroll left-to-right. 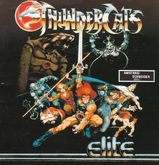 The Lost Eye of Thundera game screencap 4
Add a photo to this gallery
Retrieved from "https://thundercats.fandom.com/wiki/ThunderCats:_The_Lost_Eye_of_Thundera?oldid=31419"
Community content is available under CC-BY-SA unless otherwise noted.