The ThunderCats were a group of Cats from an unknown planet, who landed on Third Earth at the time in which Mumm-Ra the Ever-Living was overthrown by none other than the ThunderCats themselves. The Order of the ThunderCats has existed for thousands of years, and the legacy continues with the current lord of the Thundercats Lion-O, who once again will overthrow Mumm-Ra, as the Original Thundercats have done in the past.

It is the duty of the ThunderCats to uphold the code of Thundera.

1. Truth: To speak the truth at all times
2. Loyalty: To be loyal to friends and allies
3. Honor: To honor and respect superiors
4. Justice: To strive to help others and fairness in all acts that are committed

The Lord of the ThunderCats

Lord of the ThunderCats was a hereditary title and Kingship held by the Lion race, starting with Leo and passed down through his descendants Claudus and Lion-O, that ensured their control of the Thunderian population.

Ceremony of the Right of Passage

The Title of Lord of the ThunderCats was given towards the wielder of the Sword of Omens, who is chosen among the Lion Clan through a ceremony that determined if they are worthy of Kingship among the Thunderian population. This ceremony was held for more than a thousand years, passed down generation after generation towards members of Leo's bloodline.

Pumyra
Add a photo to this gallery 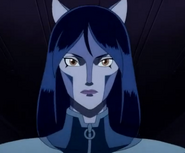 Panthera
Add a photo to this gallery
Retrieved from "https://thundercats.fandom.com/wiki/ThunderCat_(2011_TV_series)?oldid=43674"
Community content is available under CC-BY-SA unless otherwise noted.