The Time Capsule is the 15th episode of the original Thundercats series. It originally aired on 27 September 1985.

The ThunderCats embark on a quest to locate the Time capsule which contains all of the recorded history of Thundera up until the time of its destruction.

While Wilykit and Wilykat are trying out their new Hoverboards and Panthro is fitting voice-activated communicators in all the ThunderCats' weapons, Lion-O is sitting atop Mount Anguish, reminiscing about his home planet, Thundera. Seeing Lion-O homesick, Jaga appears and tells him about the Time Capsule, which houses a nuclear opto-crystal containing the entire history of Thundera. Jaga tells him to find this Time Capsule which was lost when their spaceship crashed on Third Earth. Lion-O informs the other ThunderCats about it and they all set off in different directions to find the device except the Thunderkittens, who are told to stay in Cats Lair. However, as soon as the adult ThunderCats leave, Wilykit and Wilykat sneak out on their hoverboards.

Tygra has wandered into some underground tunnels where he encounters the Molemen, burrowing relentlessly. Suddenly the Molemaster appears and is greatly displeased at Tygra's presence in his mines. He attacks Tygra with his whip but the ThunderCat manages to scare off the tyrant using his invisibility as well as fire from his Bolo whip.

Meanwhile, Lion-O's attempt to cross the River of Despair thwarted due to the Black Widow Shark patrolling the river. The Female Unicorn Keeper assists Lion-O by creating a Bridge of Light across the river. As Lion-O and Snarf make their way across the bridge, the shark leaps up repeatedly slamming its body against the bridge. Lion-O tries to use the Sword of Omens to attack the shark but it instead ends up causing the bridge to shatter. Lion-O and Snarf barely make it across as the bridge crumbles completely.

In a swampy area of Third Earth, Cheetara encounters a giant Sea Serpent. The beast lunges at Cheetara but she proves to be too fast for it and tricks it into biting its own tail. Panthro, who is exploring near a shore, comes face to face with a Crabman who snaps off Panthro's Nunchucks with its powerful claw. Panthro manages to get into the ThunderTank and escapes the Crabman. Meanwhile, Wilykit and Wilykat, while unknowingly flying over the River of Despair, are attacked by the Black Widow Shark who chews Wilykit's board to bits. She however, is rescued by her brother and the two flee the scene riding on one board.

As Lion-O and Snarf continue their search, the young lord notices something shiny in a far away cave. He uses "Sight beyond sight" and sees that it is indeed the Time Capsule. He uses the sword to call the other ThunderCats. As he enters the cave, Lion-O wonders how the Time Capsule got there as it is quite far away from where they crashed. His question is answered when a huge Caveman emerges from within the cave and claims the capsule as his. While the primitive man is incapable of speech, he uses gestures to challenge Lion-O to an arm-wrestling match and the winner will claim the Time Capsule as his. Lion-O accepts the challenge and the two lock arms. The other ThunderCats arrive and witness the intense match. Lion-O finally manages to win the arm-wrestling match and the Caveman concedes defeat and disappears back into his cave. The ThunderCats take the Time Capsule back with them to the Cats Lair.

Tygra: "Never expect a favor for a favor".

Jaga: Find the time capsule, Lion-O, and you'll discover much about your childhood.

Lion-O: No, Snarf, I'll fight my own battles! I accepted his challenge, not them.

Cheetara: Mind if I ride your board back? 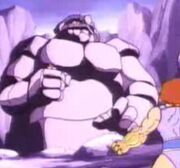 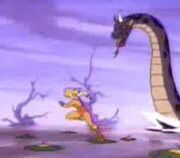