"The Ghost Warrior" is the eleventh episode of the original Thundercats series. It originally aired on 23 September 1985.

When a centuries-old phantom is accidentally released from his prison, the ThunderCats are faced with the challenge of figuring out how to fight a ghost who knows more about them then they do about him.

While fleeing from a fierce thunderstorm, two Bolkins, Hurrick and Bundun, seek shelter under a giant tree. Before they even get a chance to catch their breath, a bolt of lightning rips the tree apart, revealing a hidden chamber underneath it. Inside the crypt, the two Bolkins push a giant stone slab, thinking that there might be treasure buried underneath it but instead a ghostly apparition emerges from it. The Bolkins quickly recognize the ghost as being that of the legendary Grune the Destroyer, who ravaged Third Earth centuries ago. Hurrick and Bundun flee for their life as Grune makes his way out of the tomb.

Looking for Thundrillium to replenish his strength, Grune stumbles upon Cats Lair. Inside the lair, the ThunderCats start witnessing paranormal activities such as drops in temperature and strange noises. A piece of the lairs' wall rips away and pins Panthro against a wall. The lair's Thundrillium supply then starts draining at an accelerated rate. Tygra tries to stop the outflow but is unable to. Suddenly, Grune's ghost materializes in front of the ThunderCats, taunting them. The Cats try to fight him but it is in vain as Lion-O describes it as "fighting air". Grune then grows to an enormous size and before disappearing, he promises the Cats that they will meet again very soon.

The next day, Grune terrorizes the various peaceful inhabitants of Third Earth such as Wolos, Bolkins and Berbils by flattening their villages. The Third Earthers come to the ThunderCats, asking to be rescued from the menace. They also inform the Cats that Grune was demanding "Fire Rocks". Hurrick and the Wolo Traveller point out that they didn't have any as it had been forbidden to mine them for over a hundred mega-years due to their power being too difficult to control. Tygra recalls that they had a similar element on Thundera known as Thundrainium. Lion-O promises to help the Third-Earthlings even though he is not quite sure how.

Meanwhile, Grune had managed to locate some Thundrainium and forges a Battle Club out of the substance. Back at the Cats Lair, the ThunderCats are assessing the situation, wondering how the ghost knew so much about them. Lion-O tries to use the Sword of Omens' power of Sight Beyond Sight in an attempt to find out more about Grune but sees nothing. Tygra points out that it is because the Eye of Thundera has no psychic powers. Cheetah tells Lion-O that she does have such powers. Cheetara uses her Sixth Sense and, in so doing, she reveals that Grune used to be a ThunderCat who fought alongside Jaga to protect Thundera against all invaders. But Grune became overcome by a greed born out of a lust for power and he started destroying and looting. Jaga intervened and after a lengthy battle between the two, Grune was banished from Thundera and set adrift in space. Cheetahs collapses due to her powers having a cost for using them. The other Thundercats tell her to rest as they can figure out what happened from there: Grune's spaceship must have somehow found its way to Third Earth where he had easy pickings until he was imprisoned due to the fact few can face a Thundercat who had gone bad.

Suddenly the whole lair starts shaking and when the ThunderCats go out to investigate, they see that a giant Grune is pounding at the lair with his mace. Still not sure how to attack Grune, Lion-O stumbles upon the answer to the mystery. "We fight a ghost, with another ghost. The mightiest ThunderCat of all!", he proclaims and uses the sword to call forth the spirit of Jaga. Grune is pleased as that was his plan all along, to draw out Jaga so that he could have a rematch.

The two spirits engage in battle but Grune's Thundrainium mace weakens Jaga and he manages to disarm the ThunderCat patriarch. Lion-O throws his sword to Jaga and the battle resumes but Jaga is still continuing to get weaker due to the effects of the Thundrainium. Seeing this, Lion-O tells Jaga to take his strength. Jaga is reluctant, but Lion-O, as Lord of the ThunderCats, commands it. Armed with Lion-O's strength, Jaga defeats his opponent with ease. Grune, then pretending to offer his hand in friendship, grabs the Sword of Omens from Jaga. However, the sword pulls Grune up into the sky and disintegrates him. Jaga returns the sword and Lion-O's strength back to the young lord.

The next day, Hurrick and Budun come to the Cats Lair and reveal that they were the ones responsible for freeing Grune and that they were sorry. Panthro is angry at them but Lion-O tells him to take it easy and points out that even though the Bolkins made a mistake, mistakes can be valuable if one learns from them.

Jaga: "Better an honest enemy than a false friend, Lion-O. You must learn to tell which is which."

Lion-O: "You made a mistake, but mistakes can be valuable if you learn from them." 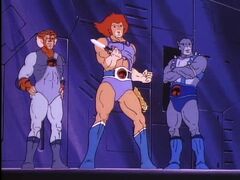 Panthro: Who could stand up to a ThunderCat gone bad?

Cheetara: There's a force in here. An alien force.
Wilykat: And it's stronger than Panthro!

Lion-O: "I command you, Jaga! As Lord of the ThunderCats, I command you to take my strength!"

Grune: "Your righteousness has made you strong, Jaga, but it has also made you foolish!"

Lion-O: You made a mistake, but mistakes can be valuable if you learn from them.
Tygra: That sounds like Jaga talking.
Lion-O: [sees a sunbeam fall] Maybe that's Jaga giving me permission to quote him.

Panthro and Tygra are spooked by the ghost

Grune forges his club from Thundranium

Jaga and Grune when they were friends

Grune's club cancels out the Sword of Omens' beam

Jaga and Grune battle
Add a photo to this gallery

Retrieved from "https://thundercats.fandom.com/wiki/The_Ghost_Warrior?oldid=44160"
Community content is available under CC-BY-SA unless otherwise noted.