William Overgard
"The Fireballs of Plun-Darr" is the 16th episode of the original Thundercats series. It originally aired in syndication on 27 September 1985.

The Mutants have developed a new fire-throwing weapon at Castle Plun-Darr and are bombarding the Warrior Maidens' home with it.

Tygra is investigating a raging forest fire near the Treetop Kingdom. He encounters, Willa who is devastated at the destruction of her home. She explains that since dawn, the Warrior Maidens' territory was being bombarded with giant fireballs. Suddenly Monkian appears on a SkyCutter and tries to attack the two but Tygra pulls the Mutant out of his vehicle using his Bolo whip. Tygra suspects that the Mutants are somehow behind all this and he and Willa head for Castle Plun-Darr.

Back at Cats Lair, Lion-O is feeling restless as he senses that something is wrong. When he asks for Tygra, Panthro tells him that Tygra went out on a scouting mission. Lion-O is concerned about Tygra and feels that he shouldn't have gone alone.

Meanwhile, Tygra and Willa have arrived at Castle Plun-Darr and in order to sneak in, Tygra turns himself invisible and enters the moat surrounding the fortress, hoping to enter it via the underwater intake pipe. Unbeknownst to Tygra, the Mutants had infused Phosphor-R into the moat's water which allowed them to spot the invisible Tygra on their control room screen. Slithe enters the moat driving the NoseDiver and attacks Tygra with the spinning blades on the nose of the vehicle. Tygra manages to avoid Slithe and throws a rock at the NoseDiver which jams up its grinding apparatus. Tygra continues to swim and enters the intake pipe but ends up losing his whip and becomes visible. The pipe turns out to be a trap and steel bars close the end of it, caging Tygra.

Inside Castle Plun-Darr, the Mutants take Tygra and tie him up to the "Four Winds", a device which is capable of pulling apart all four of its victims limbs. Slithe sets it up in such a way that the catapults would be activated as soon as the first rays of the sun hit a solar mirror attached to it. The Mutants then leave Tygra and head back to the control room.

At Cats Lair, Lion-O is unable to sleep and still worried about Tygra. Suddenly the Eye of Thundera warns him of danger and upon using the Sword of Omens' "Sight beyond sight", Lion-O sees Tygra' plight and immediately rushes to his aid. He leaps out of the window and repels himself down the walls of the lair using the extending chain from his Claw Shield. In his haste, he forgets the Claw Shield which is still anchored to the window sill.

Lion-O arrives at Castle Plun-Darr and is greeted by Willa who tells him all that had transpired and hands him Tygra's whip which she found floating in the moat. Lion-O decides to climb the castle walls but realizes that he has forgotten his Claw Shield. Luckily, Willa has an alternative solution. She pulls out a Giant Treetop Spider named "Bushy", who quickly scampers up the castle walls and pulls up Lion-O and Willa with its web lines.

While climbing up, Lion-O and Willa overheard Slythe and Monkian discussing their plan to attack Cat's Lair, as well as Tygra's impending doom. Monkian spotted Lion-O and Willa listening. Realize they've been spotted, Lion-O and Willa continue to climb up to rescue Tygra. The Mutants sound the alarm and head up.

Once inside the castle, Lion-O and Willa manage to free Tygra in time and the three of them charge through a horde of Reptilian and Jackalmen guards and lock themselves in the room housing the fireball launcher. Slithe and Monkian arrive with more guards and start melting the door of the launch room using a flamethrower.

Seeing their predicament, Lion-O calls his friends using the sword. The other ThunderCats arrive shortly in the ThunderTank and Panthro fires a harpoon with pulleys into the launcher room. Willa, Lion-O, and Tygra slide down using the pulleys just as Monkian succeeds in melting the door down. However, the fire from Monkain's flamethrower ignites the fuel in the launch room causing a huge explosion, destroying the fireball launcher as well as much of Castle Plun-Darr.

Snarf: "Better to be over concerned than not to care".

Willa: Trees that have lived for millions of years destroyed in hours.

Slithe: Well, open the can and let's see what kind of fish we've caught, yes?
(Jackalman drops the cage out of the raised case)
Slithe: It looks suspiciously like a Thundercat-fish!

Lion-O: Slithe said he would start up a fire that would burn like a beacon. He got his wish.

Willa: We Warrior Women are caught in the middle of your battles with the Mutants, and we are being destroyed!

Monkian: I'm going to mow you like a blade of grass!

Panthro: What's this? A hairy baseball? (Bushy opens up in his hand. He shouts and falls over as Willa catches Bushy.) I hate spiders!
Willa: Now you've hurt Bushy's feelings. He likes you. 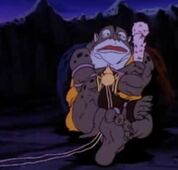 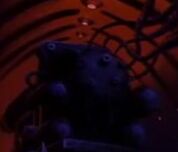