Back to page
View source

There used to be a featured article and at one time looked very active, but now it's been completely abandoned. Looks like it was affected by one of Wikia's big makeovers. -- Anythingspossibleforapossible 20:43, March 10, 2011 (UTC)

I say we can together get the categories fitting with the whole expanded universe thing, add in articles on comic books and the toys. This wiki has sat a long time. Lets work together and get it to a respectable place.  Devilmanozzy (Talk Page)  06:06, March 11, 2011 (UTC)

yeah . . . . BURN IT WITH FIRE. I was just trying to figure out ways to make the wikis from page a little more itneresting, other wikis get me jealous. I was thinking about moivng the news feed nest to it or something. But it can be removed. I am still struggling to think of something to make it interesting. Its seems like we need a porffessional that loves thundercats. Where the heck are we going to find one of those, ralok 01:42, March 30, 2011 (UTC) 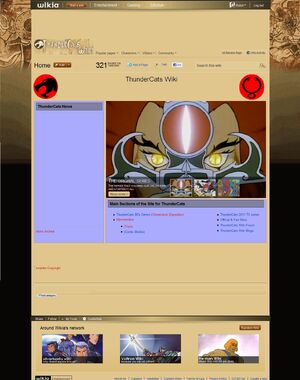 This is going to drive me crazy, the main top header thing, does not look centered. And I dont think it is anything we did wrong. I think its a flaw with wikia, I dont think they know what the word center means. ralok 16:36, March 31, 2011 (UTC)

Well theres only one way to figure this out. Get a ruler!... I'm serious. If is is off-center then you can just adjust it manually until it is centered. Also, your upcoming episodes is wrong. August the 12th has come and went.Eternity08 23:52, August 13, 2011 (UTC)

Yo I have made a better insignia of the undercats logo and I think I can provide it here. I was wondering if I have permission to replace the old one with mine? Zgrillo2004 (talk) 17:43, August 12, 2015 (UTC)

its an accurate vector that I did from a screencap. it was all done in photoshop and did it to the smallest detail possible and I feel proud of it. I feel that the current ones are not that good because it is missing details and sorry if this may sound a little off but its sloppy Zgrillo2004 (talk) 07:50, August 13, 2015 (UTC)

The more I look at the issue, the more I'm siding with leaving the original there. For one, the mumm-ra logo matches it on the right. So really its a set you are aiming to replace. Second, neither versions look sloppy to me. There is barely any differences other than Ralok's version has the same color as the mumm-ra logo. Ultimately, it isn't worth the headache you want to cause with it.  Devilmanozzy (Talk Page)  08:43, August 13, 2015 (UTC)