Snarf Takes up the Challenge

Snarf Takes up the Challenge

After Mumm-Ra succeeds in capturing all the ThunderCats, it is up to Snarf to muster up all his courage and skills to rescue them and save the day.

Snarf returns to Cats Lair only to find it deserted. He searches but cannot locate any of the ThunderCats. The only one left in the lair is Ro-Bear-Bill who himself does not know what happened to the ThunderCats. Suddenly the Unicorn Keeper Woman appears and informs Snarf that the ThunderCats have all been captured, which Snarf finds hard to believe.

She continues to narrate that it all started when the Mutants first started herding her Unicorns, causing them to flee into the Forest of Silence. Her husband came to the ThunderCats for help and they split up and went into the forest to find the unicorns. Lion-O was the first one to be captured. He was shackled by the NoseDiver that the Mutants had purposely left unguarded. Tygra was next to fall victim when he entered and was trapped in a Maze of Light. Next in Line was Panthro who, similarly to Tygra, was imprisoned inside a giant crystal chamber. The ThunderKittens followed suit when Vultureman used a strong tractor beam from Castle Plun-Darr to catch them. Cheetara was the last one to be caught by the Mutants who used a fake ThunderCats signal to lure her into their trap.

Realizing that he is the only ThunderCat left, Snarf embarks on a mission to rescue his friends. Using his ability to communicate with animals, Snarf calls a giant bat who first flies him to Castle Plun-Darr so that he can find out where the ThunderCats are being held captive. There he overhears the Mutants gloating over their success and learns that his friends are all incarcerated inside Mumm-Ra's Black Pyramid so he rides the bat to that location.

Once he reaches the Black Pyramid, Snarf talks to a spider who enters the pyramid through a crevice and proceeds to tie up Mumm-Ra's sarcophagus using its web with the mummy still inside. Snarf then instructs a woodpecker with a diamond tipped beak to bore a hole in the wall of the pyramid and reaches inside the hole to pull the lever which controls the main doorway.

With the door open, Snarf rushes into the pyramid where he finds all the ThunderCats mummified. He quickly tears the bandages covering Lion-O and hands him the Sword of Omens who uses it to free the other ThunderCats and they all leap into action. By this point, Mumm-Ra who had been struggling to emerge from his web bound sarcophagus, finally manages to open it and transforms into this ever-living form. He then fires energy bolts from his hands at Lion-O who avoids some of them and uses the sword to deflect the others. Mumm-Ra then charges at Lion-O but the young lord uses the sword's blade to show Mumm-Ra his own reflection which causes him to recoil in fear back into his tomb.

Snarf: "You never know what you can do until you try". 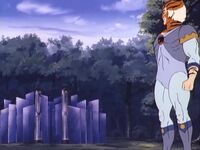 Snarf: I may be a ThunderCat, but look at me. I don't have the cunning of Wilykit and Wilykat, the intelligence and strange powers of Tygra, the speed and the courage of Cheetara, or the technology or the skills of Panthro, the strength and youth of Lion-O. How can I save them? I'm... I'm just... Snarf.

Mumm-Ra: As for your useless Sword of Omens, it makes a nice ornament for the wall!

Lion-O: Too late, Mumm-Ra!
Cheetara: It was a good plan.
Tygra: But you made a fatal error.
Panthro: You underestimated the seventh ThunderCat.
Wilykit: The bravest of us all!
Wilykat: ThunderCat Snarf!

Mumm-Ra: My master plan worked! Tailor-made traps, a case of curiosity and the cats!
Mumm-Ra: Nothing can stop the vengeful force of Mumm-Ra! (Lion-O angles the Sword of Omens at Mumm-Ra)
Lion-O: Except, evil Mumm-Ra, the horror of your own reflection!

Wilykat: I don't know what he's saying, but he sounds angry.
Snarf: He is. I promised to pay him for the ride... and I forgot. (the ThunderCats laugh)