The Snake birds are small pink snake-like creatures with wings. They are half snake and half birds. Their head and wings are similar in appearance to birds while their long slender body are reminiscent of serpents.

Just like ordinary birds, the Snake birds also build nests in trees where they lay their eggs. They also care for their hatchlings by bringing them food until the young birds are old enough to fly on their own.

A family of Snake birds appears in the beginning of the episode The Garden of Delights , in which their nest is destroyed when an earthquake causes the tree in which it was built to plunge down a cliff. 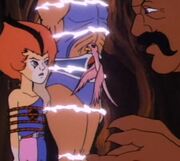 The serpentine avian also makes a small appearance in the episode The Evil Harp of Charr-Nin . When Wilykit, Wilykat, and Lion-O are trapped by Charr-Nin, Wilykit distracts the genie by having him retrieve one of these small creatures.

While the Snake bird does bear some resemblance to the Wing-ed water snakes, it must be noted that these two are completely different species. The former is more bird-like with a serpent's body while the latter is more snake-like with a bird's feathered wings.

Retrieved from "https://thundercats.fandom.com/wiki/Snake_Bird?oldid=40714"
Community content is available under CC-BY-SA unless otherwise noted.