For the 80's incarnation look here.

General of Mumm-Ra's Army
Slithe is the leader of the lizardmen and the first general of Mumm-Ra's army. In the first episode, he uses a Trojan horse-type trick to get inside Thundera and is seen helping to plant explosives inside the castle. He is based on the 1980s character of the same name.

Not much is known about Slithe's past, with the exception that he is the leader of the Lizards and that he holds a personal grudge against King Claudus, due to years of persecution and mistreatment by the Thunderian race.

Over time, Slithe sought for power. After the return of Mumm-Ra, who allied himself with Grune, Slithe and his race offered their servitude to him, in exchange for ultimate power and technology, in order for his kind to take revenge on the ThunderCats and Claudus for generations of persecution. Slithe and his newly formed army would plan an attack on Thundera by entering it through a Trojan horse. Slithe would take great delight in the fall of Thundera and shift in power as he stated "How quickly things change for the Cats, from top predator, to endagered species. In a single day!"

After finally succeeding in ransacking Thundera, and killing the long hated King Claudus, Slithe and his army, under Mumm-Ra's orders, were ordered to hunt down the remaining Thunderians and the newly formed ThunderCats in order to retrieve the Sword of Omens for Mumm-Ra.

While searching for the ThunderCats, he sent out a troop of his best men to hunt them down in Briar Woods. But unable to take any chances of failure, he ordered his army to burn down Briar Woods as he would willingly sacrifice his own men just to retrieve the Sword of Omens. He also stated he would enjoy eating what was left of the ThunderCats. After failing to destroy them, he was sent by Mumm-Ra to search for the Book of Omens by using a magic Lantern that held Jaga's soul, but was unable to use him as a navigator, displeasing Mumm-Ra in the process and having him take over instead.

After discovering that the Spirit Stone was located in the hut of an Elephant village (which was a gateway to the Astral Plane), Slithe would wait for his master to return from the Astral Plane, in order for him to retrieve it, but Grune would suggest in destroying the hut, leaving Mumm-Ra trapped inside forever. At first, he feared that Mumm-Ra was too dangerous to cross, but quickly agreed with Grune's plan. After trying to take the Elephant village, the attack failed when the ThunderCats and the formerly peaceful elephants interfered. During the process, Lion-O and Tygra managed to retrieve the Spirit Stone and escape from the Astral Plane, with Mumm-Ra flying out in the process (It is unknown if Mumm-Ra was aware of Slithe and Grune's betrayal).

Following a rash of desertions within the lizard army, Mumm-Ra ordered Slithe to recruit two new generals, much to his chagrin. Slithe complies however, successfully convincing Addicus and Kaynar to join. The three then battled Lion-O, Tygra and Cheetara, defeating them. Slithe and the others made to kill them, but they were foiled by the arrival of Panthro in the souped-up ThunderTank.

Slithe is a powerful and merciless lizard general. He holds back nothing when in battle and is willing to give up some of his men to get his prize.

Lately Slithe has shown a more traitorous side. In "Between Brothers" Grune suggested that their army should attack the portal to the Astral Plain, and leave Mumm-Ra trapped inside. At first Slithe seemed to argue that Mumm-Ra was too dangerous to cross, then he quickly agreed with him and ordered his men to destroy the hut.

His appearance is very similar to his original series design. But differences show he is overweight and has more bluish-green skin, golden yellow eyes surrounded with dark circles, the lower part of his nose is the same color of his underside, lacks canine teeth, and his amulet is now red instead of yellow with eye sockets and horns that curve downward. 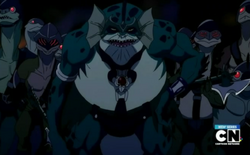 Slithe with his army 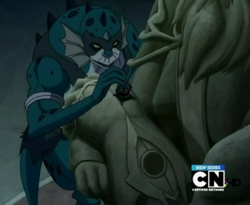 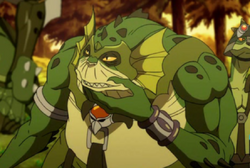 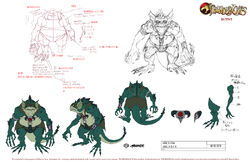 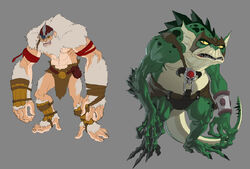