A damaged alien spaceship, which has formed a connection with Cheetara's sixth sense, crashes on Third Earth and ends up in the hands of the Mutants. The ThunderCats must race against time to rescue it before the Mutants destroy it and in turn end up destroying Cheetara.

While out in the forest with Lion-O, Cheetara suddenly starts receiving transmissions from a distressed alien spaceship which has just entered Third Earth's atmosphere. The signals tap right into her sixth sense and cause her to convulse violently and collapse. Seeing Cheetara's condition, Lion-O immediately summons the other ThunderCats using the Sword of Omens.

The Mutants, who had also been tracking the spaceship's transmissions, see the ThunderCats signal and Slithe sends Monkian to its location to investigate. There he overhears the ThunderCats talking about how the spaceship has formed a link with Cheetara's sixth sense and is controlling her mind as well as draining her strength. Monkian returns to Castle Plun-Darr and informs the Mutants about this. Based on the spaceship's last transmission, Vultureman deduces that it crashed somewhere on Hook Mountain so the Mutants set off for the location.

The ThunderCats take Cheetara back to the Cats Lair as her condition deteriorates further. Wilykit and Wilykat also trace the signal back to Hook Mountain so Lion-O, Tygra and Panthro leave in the ThunderTank, leaving the ThunderKittens and Snarf to take care of Cheetara.

Meanwhile, the Mutants have already located the spaceship but as they approach it, the craft activates its defense mechanism and starts attacking the Mutants. This greatly angers Monkian who retaliates by trying to destroy the spaceship but Vultureman stops him before he does any more damage. The Mutants remove the control unit of the ship and take it back to their fortress. The ThunderCats arrive shortly after and realize that the Mutants have already been there. They take whatever is left of the spaceship back to Cats Lair and from there, Lion-O and the Thunderkittens leave for Castle Plun-Darr while Panthro and Tygra begin repairs on the remainder of the ship.

Inside Castle Plun-Darr, Vultureman is hard at work trying to figure out how the control unit works. Lion-O and the ThunderKittens sneak into the castle and start searching for the control unit. Meanwhile, back at Cats Lair, Panthro and Tygra have completed the repairs on the remainder of the spaceship and decide to go to Castle Plun-Darr to help Lion-O. Cheetara insists on going as well despite her condition. They arrive just in time to rescue Lion-O and the Thunderkittens who have been surrounded by the Mutants. Cheetara uses her sixth sense to control the alien spaceship and make it fire blasts at the Mutants who flee from the scene. The ThunderCats then take the control unit back to Cats Lair and attach it to the rest of the ship and it flies off into space.

Tygra: "Sometimes when people come up against something they don't understand, they feel threatened".
Panthro: "And their first reaction is to destroy it". 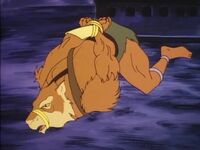 Slithe: The ThunderCat cub in trouble, at the edge of the forest! Take one of the Skycutters, Monkian. See if there's anything we can do to make it worse, yessss?

Cheetara: It's cold. And it's frightened. And we have to find it, quickly, before it's too late.
Wilykit: [studying the radio-transmissions on the scanner] They sound like they're coming from somewhere on Hook Mountain.
Snarf: [whimpering] Cold and frightening - that makes sense.

Snarf: I'm too close to the ground to enjoy snow.

Vultureman: No, Monkian! Stop it! Cease fire! You'll destroy it! We need it unharmed.
Monkian: Nothing attacks Monkian and gets away free.

Jackalman (about the Control Unit): I don't like it! I don't understand it! We should get rid of it!
Monkian: Destroy it, before it harms us!
Vultureman: Ignoramus! We must learn from it.
Slithe: I'll give you just twelve hours, Professor Vultureman! If you have not unlocked its secrets by dawn, I'm going to obliterate it! Yesss?

Wilykit: Tell us what it was saying. Please, Cheetara?
Cheetara: Well, it said it was sorry it caused so much trouble, but it had no choice. It needed help.
Wilykat: And?
Cheetara: And, it said to thank the Thundercats, and, one day it will do the same for us.
Wilykit: And? Tell us, Cheetara.
Cheetara: [laughs] If you want to know any more, you'll have to learn to read my mind. [everyone laughs]