Pumyra (voiced by Gerrianne Raphael) is a New ThunderCat. She is quick and is good at using her sling.

Pumyra is a young female Thunderian introduced in the second season. This sexy young woman, based on the puma, is a talented healer and medic. She uses her knowledge of Thunderian medicine, combined with the wide range of medicinal supplies to be found on Third Earth, to help heal and cure her fellow ThunderCats.

Her compassionate nature lends to offering an alternative perspective, solving problems or conflict without fighting by using compromise and understanding. No proper relationship with her and a fellow ThunderCat has been established, as her importance diminished as the series went on.

Possibly the most agile climber ThunderCat next to the Thunderkittens, Pumyra employs an incredible leaping ability — often able to vault higher than even great jumpers like Tygra or the ThunderKittens. When Pumyra was chasing Luna through a lava field, she was able to run at super speed in short bursts. Her speed ability creates a lighting bolt energy effect that is immediately followed with a thundering sound whenever she uses it. In combat, she uses a special whipcord, which resembles a "cat’s tail," that can launch special pellets and spheres with a slingshot.

Pumyra, Lynx-O and Bengali tried to board the ThunderCats flagship as it was leaving the dying planet of Thundera, but they were too late, the ship had to leave immediately. Fortunately they were rescued by a nearby Berbil Ship the ship was damaged and crashed on Third Earth, on a deserted island where the Thunderians and Berbils made their new home. When Mumm-Ra discovered there were other Thunderians on Third Earth, he sent Hammerhand and his crew to capture them. The Thunderians fought hard against them, but were ultimately captured. After being taken to fire rock Mountain, the Thunderians made an escape, with Pumyra knocking out Jackalman after causing a distraction, allowing them to get away.

When the other ThunderCats arrived and reunited with the Thunderians, they worked together to defeat the evil forces of Mumm-Ra. Pumyra asked to know their saviour's name, and was told by Lynx-O that it was Lion-O, and, at Cats Lair, Pumyra was given the ThunderCats insignia along with her friends, and officially joined the ThunderCats.

When all the ThunderCats left to establish and rebuild their New Thundera kingdom, she remained on Cat's Lair while Tygra remained on the Tower of Omens.

When she lived on Thundera she learned about healing, these skills she applied as a ThunderCat. 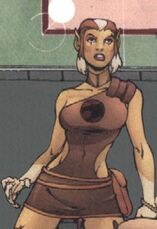 Pumyra as seen in the comics 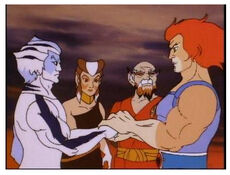 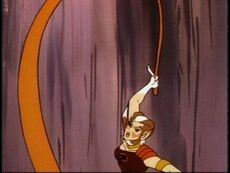 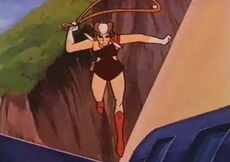 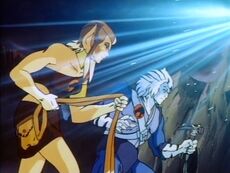 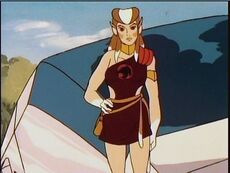 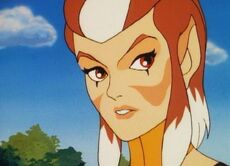 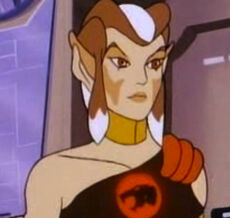 Add a photo to this gallery
Retrieved from "https://thundercats.fandom.com/wiki/Pumyra?oldid=39381"
Community content is available under CC-BY-SA unless otherwise noted.