Voice Characterizations are listed by season

Mumm-Ra transforms into a Thunderian named Pumm-Ra in order to infiltrate the Cats Lair and steal the Eye of Thundera.

While out for her morning jog, Cheetara is drugged and captured by the Mutants as part of Mumm-Ra's plan. Mumm-Ra then transforms himself into a Thunderian named Pumm-Ra and when Cheetara regains consciousness, he tells her that he saved her from the Mutants. He also tells her that he too was a resident of Thundera and managed to escape its destruction by fleeing in a small spacecraft.

Cheetara takes Pumm-Ra back to Cats Lair where he tells his story to the rest of the ThunderCats. Lion-O is keen to induct Pumm-Ra into the ThunderCats but Panthro and Tygra are wary and decide to give Pumm-Ra a week's probation. That night, while the ThunderCats sleep, Pumm-Ra sabotages both the Cats Lair and the ThunderTank and also succeeds in stealing the Sword of Omens and the Claw Shield.

The next morning, Lion-O and Snarf are left to guard the Lair while the rest of the Cats go off to the Thundrillium fields. Pumm-Ra seizes this opportunity and signals the Mutants to attack. He himself tries to use the Sword of Omens against Lion-O but because it cannot be used for evil purposes, a bolt of lightning knocks it and the Claw Shield out his hands. The Mutants attack using the ThunderTank but the rest of the Cats arrive in time and drive them off.

Meanwhile, Pumm-Ra locks himself inside Cats Lair. Tygra suggests an alternative route into the Lair and he enters the Power Exhaust pipe into the fortress. The rest of the ThunderCats eventually manage to enter the lair and finding himself cornered, Pumm-Ra transforms back to Mumm-Ra and teleports back to his pyramid. 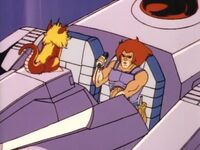 Tygra: Although Lord Lion-O leads us, Jaga chose me to be the head of the ThunderCats council.

Jaga: The mystic Sword of Omens cannot be used for evil deeds! Attempt it and know the wrath of Jaga!

Panthro: Cheetara late? That's like the sun forgetting to set.

Panthro: I told Lion-O that he could have the tank this afternoon.
Tygra: Can he drive it?
Panthro: He took to it like a fish to water.

Mumm-Ra in the guise of Pumm-Ra

Pumm-Ra steals the Sword of Omens