LJN Toyline
Playful was an Argentinian toy company that was licensed by Telepictures to produce LJN "ThunderCats" toys for the Argentinian market.

The toy figures were packaged carded just like the LJN toys. Playful also used most of the same molds that were used to produce the LJN toys. However, the plastic used by Playful to make the toys was of lower quality than that used by LJN. Also some toy figures molds were switched and there were variations in their paint work as well as their weapons.

The card backs of all the Playful line figures depicted the same 14 figures as the LJN Series 2 card backs. However, the following was not made that was shown on the card (and in some cases names translated): Snowman of Hook Mountain, Hachiman, Tuska Warrior (Tuska), Grune the Destroyer, Ratar-O (Ratax), S-S-Slithe (Reptilio), and Vultureman (Buitro). Also not listed, but were released: Jaga, Bengali, and Lynx-O; from series 3. Included as well was the odd Astral Moat Monster toy. Also two vehicles from the LJN line were released: "ThunderTank" and "Mutant Fistpounder". Rounding out the line was "Thunderwings" accessory item, and the exclusive two types of Shutlle Gun mini vehicles solo and with action figures Lion-O and Mumm-Ra. 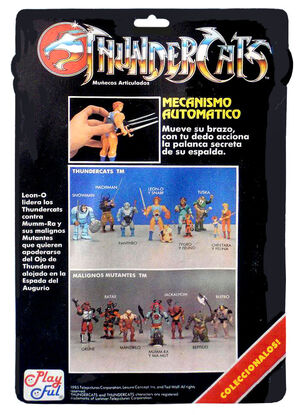