The Necromechs were a race of cyborgs that resided on Third Earth.

They were skilled in the art and science of technology and they were responsible for Soul Sever's transformation, who was once a being of flesh and blood turned into a cyborg. The reason for the Soul Sever's transformation was that in exchange for his servitude, the Necromechs would allow him to retrieve the souls of his deceased family and bring them back in the form of new cyborgs, in order to be together again.

But the Soul Sever became obsessed with technology, so obsessed that he would divulge himself in forbidden experiments. He stopped at nothing and would go to a great lengths to fulfill his desire, in the end he slaughtered every single Necromech to prevent them from stopping him.

What is left of the Necromechs is not quite known but it is seen that the Soul Sever used their remaining parts to construct new robot slaves. 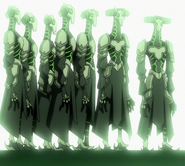 New Necromechs. Necromech robots as they exist now.
Add a photo to this gallery
Retrieved from "https://thundercats.fandom.com/wiki/Necromechs?oldid=45161"
Community content is available under CC-BY-SA unless otherwise noted.