Lizards are one of several sapient species on Third Earth.

Lizards inhabited marginal areas and often came into conflict with the Cats, which held military superiority over them, until they acquired access to advance military technology from Mumm-Ra and Grune.

In Legacy, it was shown that the Lizards were slaves of Mumm-Ra in the past alongside the Jackals, Monkeys, Birds, Elephants, and the Tigersharks.

In New Alliances, some of Slithe's Lizard soldiers have been deserting after being defeated by the ThunderCats. This causes Mumm-Ra to have Slithe prosecute any Lizards that he catches in the act.

Lizard's civilization is considered to be (in terms of cats) primitive. Lizards were obviously inferior - in cultural and progress terms - to Thundercats for a long time. This is clearly seen at the first phase of the battle for Thundera. The lizard's army, compared to Thunderian Royal Army was armed with primitive weapons with spears, hammers, axes and clubs, had almost no metal armor, and was poorly organized.

The situation changed after the conclusion of an alliance between lizards and Mumm-Ra. Lizards have access to advanced military and civilian technology, and managed to create a strong industrial base (in particular, the huge Cloud Peak Mine mining complex).

It is clear that new technologies have not yet become part of the lizard's culture, and, apparently, only available to very few. Symbolic elements (such as an amulet on the Slithe's chest) indicate that their perception of the world is still quite traditional. 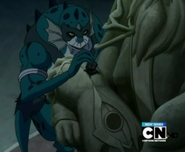 Add a photo to this gallery
Retrieved from "https://thundercats.fandom.com/wiki/Lizards?oldid=43628"
Community content is available under CC-BY-SA unless otherwise noted.