The Book of Omens

Lord of the ThunderCats

Lion-O is the son of Claudus. His adventures are shown from childhood to adulthood on Third Earth and New Thundera, together with his friends and followers, the ThunderCats.

In the series prologue, Lion-O is a 12-year-old boy, taken care by Snarf and under the guidance of Jaga, since his father, Claudis, was in the middle of a turf war against the Mutants.

Claudis ordered Jaga to hold the title of interim Lord of the Thundercats until Lion-O grew up. Both of them, along five other Thunderian nobles took the flag ship of the Thundercats in order to fly to Third Earth, while their planet Thundera was on the road to destruction. During this journey, he aged physically until he became an adult in his twenties; this was due to the suspension capsule, diminishing but not altogether preventing aging ("Exodus"). Coincidentally, such a malfunction did not occur with Wilykat and Wilykit, who were around the same age as himself, though as Lion-O recalls in the series' first episode, Jaga had mentioned that some aging does take place while in the suspension capsules in which he and the other ThunderCats were placed when their flagship was damaged.

The now grown-up Lion-O assumed that this was the reason for his aging to adulthood, though he did not express any confusion about the matter, which seems to indicate that he simply accepted it as a quirk of the capsules. Although cunning and skillful, he is truly a child in a man's body, and throughout the series, must learn what it takes to become a true leader and gain true maturity.

In the latter half of the show's first season, Lion-O has to put all that he has learned to use in the "Annointment Trials," which consist of contests of strength, speed, cunning, and intelligence (this last is referred to as "mind-power" in the story arc) against each of the ThunderCats: Panthro, Cheetara, Wilykit and Wilykat, and Tygra respectively (complicating matters for Lion-O is the fact that he is required to be unarmed for the contests; moreover, the rest of the non-participant ThunderCats are not allowed to assist him). The Mutants are at all times a threat to the ThunderCats, and they attempted to interrupt Lion-O's trials —ultimately without success— to take advantage of this in an effort to leave the ThunderCats leaderless. Lion-O will ultimately triumph over Mumm-Ra in final trial ("The Trial Of Evil") in the heart of the villain's pyramid in which he discovers that Mumm-Ra, like any Egyptian mummy, is dependent upon his own sarcophagus. In the end of the first season, Lion-O is crowned the true Lord of the ThunderCats in an august ceremony attended by nearly every Third Earth inhabitant. Interestingly enough, this will not be the end of Mumm-Ra, as established in the following movie, ThunderCats Ho!

In this TV movie, there were three new Thunderians introduced, who had also survived the destruction of Thundera. A massive cast of returning heroes and villains were incorporated into the story to make it the most epic ThunderCats adventure yet produced. Lion-O is still trying to surpass many types of obstacles, from being rescued from a boiling sea water due to the Berserker's ship cannon, then surviving an avalanche made by the new Mutant's machine —The Iron Fist— then falling from the sky from Shiner's cruise starship, later being trapped in Mumm-Ra's mummies trap bandages, and at last ending in Fire Rock Mountain, to have a one-on-one duel against the samurai Hachiman, who was tricked by Mumm-Ra to fight the young leader once more. This was the first time Jaga the Wise directly helped Lion-O since Grune the Destroyer reappeared. Jaga managed to ask for the Star of Thundera, who was entrusted to Lion-O as a medallion to not be affected by the dangerous Thundrainium. This medallion was taken away by Mumm-Ra, who believed it would give it absolute power, but conversely concluded with the apparent destruction of Mumm-Ra (this is the "second known death" of Mumm-Ra, in fact).

The Threat of the Lunataks and The Treasure of Thundera

A weakened Mumm-Ra asked for the mutants help to free the wicked Lunataks, who were in a lava crust prison. At first, they proved too much for Lion-O, especially Tug Mug's gravity attacks (being one of the few to tear into pieces the Sword of Omens) and Alluro's mind magic spell. But Lion-O had already grown from his past experiences enough to defeat all of these villains. Together with the New ThunderCats and Panthro's new vehicles he finally restored peace on Third Earth and found the Treasure of Thundera on his reconstructed home planet, he did indeed mature. Lion-O and most of the nobles finally established on a completely restored New Thundera at the series finale.

Despite all this and despite his training later on the Book of Omens in the Wildstorm Comics, he still will have to endure his most difficult trials to defeat his nemesis Mumm-Ra since he will make a spell to make him age and become temporarily an elderly in the last arc of the comics: Dogs of War. Nonetheless, he will become the true Lord of the ThunderCats and afterwards guide New Thundera for a reign of peace and balance.

Lion-O is a Thunderian male, with moderately-long, wavy, scarlet-red hair, and ginger-orange eyes. He is a fully-grown adult, with a thick, built, muscular physique. He has a heart-shaped hairline, and thick, wavy sideburns. His coat is caramel in color, with light cream-colored markings around his eyes, mouth, and on his arms. His face is very masculine, with a prominent brow, defined cheekbones, a cleft-chin, a chiseled jaw, and thick, choppy eyebrows. His eyes are large with thick lashes and black tear-drop marks on the lower-lids. Like most Thunderians, he has fangs, claws, and slit-pupils.

Lion-O's primary outfit consists of an azure-blue armor, with blue lining along the shoulder-straps and abdominal-opening. The outfit is heavily exposed, but includes blue boots with white-lining, as well as a thick blue support-belt with white-lining, and the Eye of Thundera at the center; the belt also has three rounded-studs on each side of the Eye.

According to show notes given to the animation team via model sheets, Lion-O is listed at:" The largest, and most perfectly-proportioned character. A 6'9" body-builder type. Lion-O also carries a large, metal lion's claw glove/shield, which he wears on his left arm during battle."

When he arrived on Third Earth he was an adult. He did not have the chance to age naturally, thus he was a child in an adult's body. He was immature and headstrong. It took him a long while to mature. It was a very difficult process.

On Third Earth, much like his big-cat namesake, Lion-O had super strength, endurance, and agility. Very handsome, as described by Cheetara. He also had the cunning and skills of a fighter, but because of the time spent in his capsule, he missed the experiences needed in growing up. Now acknowledged as the heir to the throne of the ThunderCats, he wields Jaga's legendary Sword of Omens. Panthro and Tygra will serve as role models to Lion-O, especially in the first half of the First Season. Later on in the series, he will ask for some advice from Lynx-O, but his main mentor and guide will still be Jaga the Wise.

Lion-O as a child (from episode "Exodus") 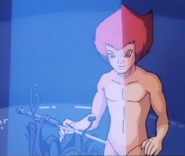 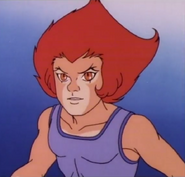 Lion-O as a child now clothed. (from episode "Exodus")

Lion-O as a child saying bye to Jaga. (from episode "Exodus")

Lion-O using the Sword of Omens 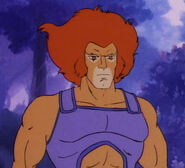 (from episode "The Terror of Hammerhand")

(from episode "The Terror of Hammerhand")

(from episode "Trouble with Time") 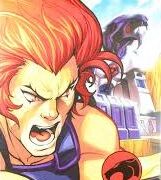 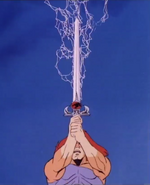 (from episode "The Unholy Alliance")
Add a photo to this gallery