General of Mumm-Ra's Army
For the 80's incarnation look here.

Kaynar is the third general of Mumm-Ra's army. In his first episode appearance, he is called in to help Slithe and Addicus track down the ThunderCats. He is based on the 1980s character known as Jackalman.

Not much is known about Kanyar's past, except that he himself has admitted that he murdered eleven of his fellow prisoners during his incarceration. He was in solitary confinement before Slithe and the Lizard army released him. Mumm-Ra appointed him a General to deal with the Lizard army deserters.

Kaynar can best be described as a vicious, reckless, bloodthirsty maniac with no sense of morality or conscience, which is why Mumm-Ra wanted him to be his general. He is extremely mentally unstable, At one point, he claimed to have voices in his head. Even Addicus finds his sanity to be questioned. He is constantly laughing insanely.

He is also prone to hold a grudge, as evidenced by his murdering of the two guards that led him to solitary.

He also seems to be rather creative, as when Slithe gave the order to execute the cats in whatever manner amuses him most, he was quoted as saying, "Ooohh... The possibilities."

He possesses a twisted sense of humor: After pushing Lion-O over a cliff to his death, he mockingly said "Whoopsy."

Just like Addicus, he enjoys eating his victims. When the ThunderCats were held prisoner, he doggedly asked Slithe to let him eat one of them.

His appearance is very similar to his original series design. However, he is a lot taller and larger in physique, has patches of darker fur, whiskers, longer ears, red eyes with golden yellow corneas, and wears a double-padded shoulder pad with an enormous spike.

Kaynar is quite the formidable warrior with great strength and an exceptional sense of smell, being able to detect Tygra even though he was invisible.

Addicus and Kaynar fighting side by side for the first time. 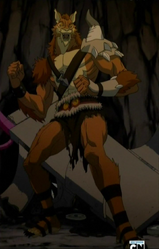 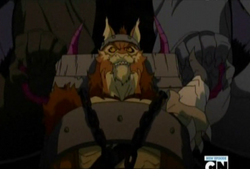 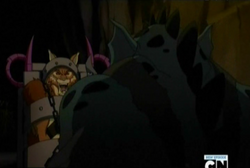 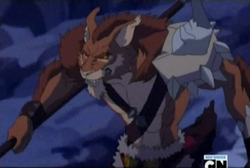 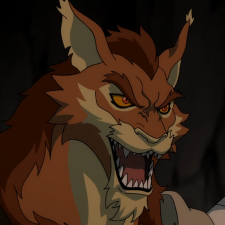 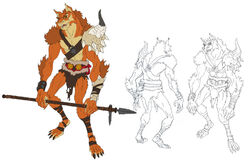