The Sword of Omens

Grune is a former Thundarian General who betrays his native Thundera to Mumm-Ra. He is based on the 1980s character of the same name. He is voiced by Clancy Brown.

A close friend of King Claudus, Grune was one of Thundera's greatest generals.

Grune met Panthro early in their careers with the Thunderan Army, during a battle against the Lizards. They both began low in the ranks, but quickly distinguished themselves through their bravery and great skill. Though they had honor from all Thundera and friendship from the King himself, Grune always sought more. He let Panthro know his ambition to one day become king.

One day, Claudus announced that neither Panthro nor Grune would become General of the Army, but rather Lynx-O. Claudus informed them that he had an entirely different task for them: to go out into Third Earth on a quest to find the Book of Omens. Grune and Panthro spent years on their quest, which Grune initially dismissed as a ploy by the king done to rid himself of Grune's ambition. Eventually, while crossing a desert, Grune heard a voice calling to him. He followed the voice until it lead them to a Black Pyramid. Inside he discovered and released Mumm-Ra, who immediately promised Grune all the power he desired in exchange for his loyalty. He also announced his desire to repossess the Eye of Thundera. Grune turned on Panthro when his friend would not join them, knocking him into an abyss beneath the pyramid.

Subsequently, Grune was placed as a commander alongside the leaders of Lizards. This saw him return to Thundera with an apparent trophy for his King and claimed that Panthro perished in battle. Hiding his true loyalties, Grune attended the celebratory feast that was made by Claudus for his return where he told Lion-O that in his travels he had never seen any technology. When the Lizardmen army struck Thundera, Grune openly revealed his treachery as the trophy he had brought back was a trojan horse that carried a commando force of Lizardmen including Slithe who devastated the kingdom of Thundera from within. Grune later stood alongside the revealed Mumm-Ra when Claudus was killed and the kingdom of the Thundercats was brought to ruin. He attempted to hunt down the survivors but was stopped by Jaga who was instead captured by their forces.

Afterwards, Grune stood alongside his master Mumm-Ra when the undead sorceror was torturing Jaga in the Black Pyramid as they sought the location of the Book of Omens. The traitorous Cat was skeptical that Jaga knew where the Book was but Mumm-Ra took Jaga's essence into a lantern where he directed its magic into the supposed site of the Book of Omens.

While Slithe lead an expeditionary force to hunt down the escaped ThunderCats, Grune made his way to Cloud Peak Mine to oversee the army's mining of the Thundrillium, the power source for the army's machines and—according to Grune—the "life blood of Mumm-Ra's army." At the mine, Grune was surprised when the Thundercats arrived—with Panthro with them. Displeased that Panthro was still alive, Grune did not stay to fight. Instead he ordered Driller to battle them and fled the mine.

He's later seen at the Elephants village, trying to locate the Spirit Stone. But before he could claim his prize, Thundercats arrived and defeated his troops. Forcing him to flee once again.

Panthro reveals a bit of their history to Wilykat and Wilykit including how he lost his other sabretooth: he (Grune) ripped it out in order to defeat Spidera. He told Panthro that he did it because any sacrifice was worth the defeat of your enemy. Later he has a discussion with Slithe about his attack on the village and he reveals that he would betray Mumm-Ra if he had to and Slythe tells him that for a cat he is such a snake. During the battle he confronts Panthro on his tank and insists that they fight to the death, first with their weapons then with their fists. When the Astral Plane begins to collapse, Grune gets caught in the vacuum as the portal closes and grabs hold of Panthro's arms for dear life, telling him he must pull him free or they'll both perish. Panthro responds with the exact words Grune told him years ago "Any sacrifice is worth the defeat of your enemy" and pushes him completely into the portal, trapping Grune in the collapsed dimension, (and severing Pantro's arms in the process).

Whether Grune was killed or trapped in another dimension is unknown.

Grune is a large Cat with brownish fur. He has a unique trait not seen often amongst other Thunderians, that being his large saber teeth.

Grune seems to be larger than the average Cat. He is seen fighting with a mace-like weapon that exudes electrical power.

Grune was shown to be ambitious from an early age, telling Panthro that "Grunt-work wasn't what I had in mind when I enlisted". Though brave, skilled, and fearless on the battlefield, his desire for personal glory and his unwillingness to follow the rightful king ultimately prove to be his undoing. Grune betrayed Thundera because Mumm-Ra gave him the means of achieving his ambitions of total power, and because he had, in his paranoia, believed claudus had sent him and Panthro on a wild goose chase to be rid of a threat to his throne.

His ambition was defined by his words 'Victory is worth any sacrifice', which he once demonstrated by tearing out his own saber-tooth to kill a giant spider that had caught him and Panthro in its web. 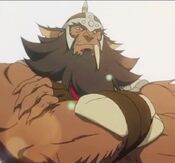 Grune in his Thundarian Armor 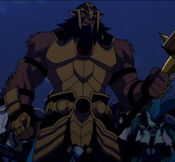 Grune in his post-betrayal armor 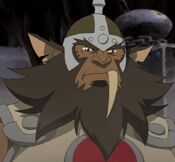 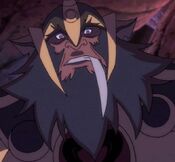 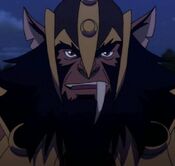 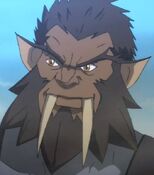 Grune when he was younger