see Crew Credits article
Not to be confused with Exodus the 1985 series episode or Exodus: The Movie.

Exodus, Part 1 is the first episode of ThunderCats Roar, the 2020 TV series.

Text taken from Cartoon Network's Website. Note that for part one and part two they use the same preview write-up.

Season 1 - Episode 1
Fleeing the destruction of their home planet Thundera, Lion-O and the ThunderCats land on the mysterious, dangerous, all-around awesome world of Third Earth! But their enemies, the Mutants of Plun-Darr have followed them and it turns out Third Earth already has a Mumm-Ra problem, can Lion-O learn the ropes of being a leader in time?

After the destruction of their home planet Thundera, the titular ThunderCats fly off to a new home, only to crash land on Third Earth after being shot down by their arch-enemies the Mutants. Following a scuffle with the Mutants, Lion-O pursues them into the wild while the rest of the ThunderCats meet the Berbils whose village their ship unknowingly destroyed in the crash. Luckily, the Berbils are quick builders and opt to build their base while warning them of Mumm-Ra. Lion-O ends up encountering Mumm-Ra when chased by the Mutants to the villain's pyramid, with Mumm-Ra destroying the Mutants' ship before returning to his lair. 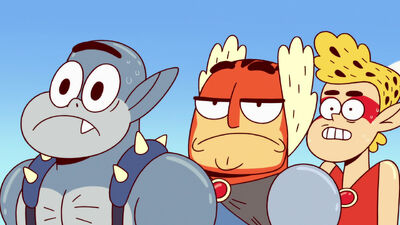