The Elephants are a giant grey-skinned race brought to Third Earth when the black pyramid fell.

In Sight Beyond Sight, the ThunderCats encounter a colony of spiritual Elephants who don't have a very good memory. The Elephants were in possession of one of the missing magic stones the Thundercats were searching for. Unfortunately, they didn't know where the stone was currently located.

The elephants being peaceful meditated briefly on their role in the battle. They ultimately came to the conclusion that they must fight.

They helped the ThunderCats once again in "What Lies Above, Part 2" where they help to fight Mumm-Ra on Avista. 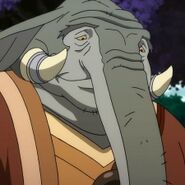 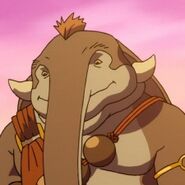 Elephant slaves
Add a photo to this gallery
Retrieved from "https://thundercats.fandom.com/wiki/Elephants?oldid=43695"
Community content is available under CC-BY-SA unless otherwise noted.