For the 80's incarnation look here.

Driller works under Grune in the episode Old Friends

A robotic creation that came under the service of Grune after he swore allegiance to Mumm-Ra. The Driller was described as a machine, and one of the few things that Grune stated he could trust. It was deployed in the Cloud Peak Mine where it was responsible for mining and locating new deposits of Thundrillium Large stores of the substance were mined by the Lizards and were used to power Mumm-Ra's large technological based army. When the surviving ThunderCats attacked, Grune was challenged by his old friend Panthro. However, instead of fighting him, the Driller emerged.

Grune then ordered the robot to attack the ThunderCats, it did as ordered. Giving Grune the chance to escape. In the battle, Lion-O attacked the machine with the Sword of Omens and managed to break the drill on its head when it could not pierce the Eye of Thundera thus leading to its deactivation.

Driller is a tall, dark colored robot with two arms and no legs.

The Driller robot can drill through rocks and create tunnels, which can cause avalanches.

The Driller lacked any definitive personality traits and acted much like an emotionless computer. 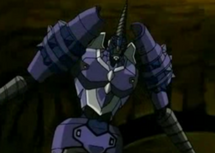