Dogs are a race of sapient canines and one of the major races of Third Earth. Their capital is the City of Dogs.

Countless centuries ago, Dogs were one of the many races enslaved by Mumm-Ra and forced to serve in his army. When their Jackal leader, Shen made a pact with the Lizards and the Thunderians' leader Leo, they joined forces to take down Mumm-Ra and succeeded. However the spaceship that carried them became trapped in the gravitational pull of a nearby planet which would soon become their future homeworld Third Earth, where the races would reestablish their civilization and begin anew. After this, the history of their origins, their enslavement to Mumm-Ra and their pact with the Cats became lost in time and faded into myths and legends.

Dogs have had a history within Thundera as lower class citizens and were seemingly disliked by most Thunderians and lived in the city's slums due to prejudice. Many of the Dogs that resided in the slum most likely died along with many Cats during the Lizards assault on the city.

The ThunderCats arrived in the City of Dogs during their quest where they discovered a lone Thunderian who was being held in the Pit and being forced to battle and Lion-O then made it his mission to free her.

In What Lies Above, Part 2, Dobo and some of the Dogs are among the races that Wilykit and Wilykat enlist to help defend Avista from Mumm-Ra and his army.

Much like Thunderians, Dogs have humanoid bodies and are composed of many different breeds thus giving their race a varied appearance. Most Dogs that have been seen resemble mutts, while others resemble Doberman Pinschers, Pitbulls, Jackals, Wolves, Foxes, Labrador Retrievers, Mastiffs, Bulldogs, Sheepdogs, Spaniels, and many more.

They reside in a large city made of stone located in the middle of a desert wasteland and there are many bars and bazaars throughout the city, but the city's main focus is the Pit, a large arena within the city were Dogs send their slaves and criminals to fight all out battles. Dogs are fans of brutal battles and many of them gather to the Pit to watch countless battles for their enjoyment. However they were not a completely battle loving race and they did have a normal society outside the Pit and they were capable of showing loyalty and mercy to some extent to comrades and brave fighters.

They appear to be led by a tall doberman or Jackal-like dog named Dobo who is also in charge of the Pit. Bulldogs also play an important role in their society as guards, usually overseeing the Pit and prisons. In ancient times, Jackals seems to have had a great deal of authority over the other Dog tribes, similar to how Lions in Thunderian society were of noble status, however it is unknown if Jackals still hold a noble status in the present.

They were often thought of as less culturally advanced by the Thunderians and were often treated as lower class citizens within Thundera.

Dog citizens at the Pit. 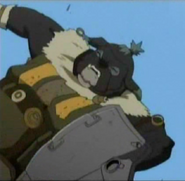 Citizens of the City of Dogs.

Add a photo to this gallery
Retrieved from "https://thundercats.fandom.com/wiki/Dogs?oldid=45124"
Community content is available under CC-BY-SA unless otherwise noted.