Not much is known about the Dog Cop, except that he is the Law in the City of Dogs and apparently knows Tookit well, but he does not seem to like him.

The Dog Cop appears to quite built and seems to be based off a Boxer, with brown fur, white paws and feet, and a brown and white face with black streaks that start from his eyes and go down to his jaw.

He has two spiked shoulder pads, one on each shoulder, that connect to his chest by a green emblem that also connects to his belt, and he also has a green shield or something on his back. His belt is red and black with a green emblem on it as well.

His skirt is dark red and goes down to his knees. He also wear one spiked arm bracelet and dark red bands around his legs. And he also has a spiked helmet on his head.

The Dog Cop is very stern and also is very vicious when it comes to chasing down criminals. He is very tough and holds the law up in high standards and will arrest anyone who has broken the law no matter how old they are, as he locked up Wilykit and Kat in the Pit, merely under the charge of possession of stolen items (which were "gifts" from Tookit).

However, he is disgusted by Tookit's tactic of manipulating orphaned children and using them for thieves, hinting he's not all bad and might be capable of leniency.

The Dog Cop carries a spiked mace-like weapon that is similar to Grune's but smaller in size.

He doesn't seem to have any specific powers, but he is a giant size dog (where the Wileys are only up to his knees) and shows to be an average runner, but not as fast as Tookit. He is quite strong, (being able to pick up both Wileys in one arm each). 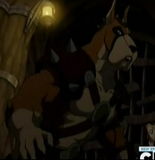 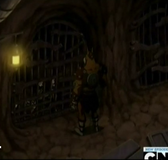 Locking up Kit and Kat. 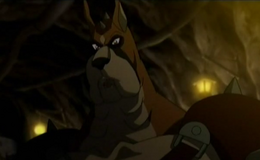 Checking on the prisoners.
Add a photo to this gallery
Retrieved from "https://thundercats.fandom.com/wiki/Dog_Cop?oldid=45123"
Community content is available under CC-BY-SA unless otherwise noted.