Berbils is the third episode of the original Thundercats series. It originally aired on 11 September 1985.

For other uses, see Berbils (disambiguation)

Lion-O and Snarf encounter a band of small robotic bears called Ro-Bear Berbils. The ThunderCats help the Berbils by driving away their enemies and the Cats and the bears form a friendship but Mumm-Ra is greatly displeased by this and will do everything in his power to prevent this alliance.

Panthro has completed building a ThunderTank using only the equipment that he salvaged from their wrecked spaceship. Suddenly a hail storm begins and Tygra , Cheetara , Wilykit and Wilykat take refuge inside the spaceship wreck while Panthro opts to stay inside the tank. The storm completely buries the ship in debris but Panthro manages to dig it out using the tank.

Meanwhile, Lion-O and Snarf are exploring the surrounding woods when Lion-O falls into a trap hole in the ground. The creatures responsible for setting the trap are a group of robotic teddy bears who tie-up both Lion-O and Snarf and take them to their village . Once there, the leader of the bears, Ro-Bear Bill, unties the two captives and tells them that they are a race called Berbils who, just like the ThunderCats, are aliens here on Third Earth, having come from the planet Ro-Bear.

He then takes the two guests around a tour of their village but it is cut short by the sound of an alarm, signalling the impending attack by creatures known as Trollogs . Ro-Bear Bill explains to Lion-O that the Trollogs frequently raid their village for their Berbil Fruit which they in turn give to the Giantors in exchange for the fruits of the Trollberry bushes, the Trollog's only diet. Lion-O scares of off the Trollogs using the Sword of Omens but soon the furious Giantors arrive. However, Lion-O calls the other ThunderCats for help who arrive swiftly and drive off the Giantors. This act of helping the Berbils further strengthens the friendship between the two alien groups.

Mumm-ra meanwhile, having witnessed all the events from his Cauldron, is enraged at the new alliance as it would mean an endless food supply for the ThunderCats from the Berbil Village. He assumes the form of a swarm of locust and attacks the Berbil Village. As soon as Lion-O interferes, the swarm combines into one giant locust. Lion-O jumps onto the huge insect and forces it away from the village. However, the giant locust drops Lion-O into the crater of a nearby volcano and as he is falling, the Sword of Omens falls out from the Claw Shield. At this point, the spirit of Jaga appears and tells Lion-O that he can call to the Sword and it will obey. Lion-O summons the Sword to his hand and it carries him out of the volcano and to safety.

The Berbils and the Cats celebrate their newly formed friendship with a feast where the Berbils offer to help build the Cats Lair.

Lion-O: Friends help each other. 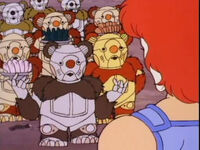 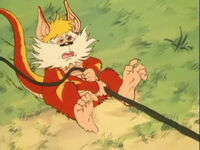 Wilykat: You did it! A Thundertank. And you built it just with the junk you scrounged from the spaceship?
Panthro: Salvaged. The equipment I *salvaged* from the ship.
Tygra: I must admit, Panthro, I didn't think even you could do it.
Panthro: Are you kiddin'? You're looking at the Master Scrounger of the Universe.


Lion-O: Oh, pretty soon, you'll be jumping at your own shadow.
Snarf: Who, me? Old Snarf isn't afraid of north - YAA!
Lion-O: [laughs] See?
Snarf: When you're fierce like me, you throw a fierce shadow, that's all.


RoBear Bill: [pointing to the blueprint] Your home?
Tygra: Yes. Well - it *will* be. We'll be building it right up there.
RoBear Bill: You will build it? Just you few?
Lion-O: Oh, it will take quite a while, of course, but...
RoBear Bill: Please.
[huddles with the others then turns back to them]
RoBear Bill: We will help you build your home.
Tygra: Well, thank you, but we couldn't allow you to. It's much too great an undertaking for...
RoBear Bill: You said we were friends. Friends help each other.
Lion-O: [to the one who is already grinning] He has a point, Tygra.

Retrieved from "https://thundercats.fandom.com/wiki/Berbils_(episode)?oldid=44084"
Community content is available under CC-BY-SA unless otherwise noted.